JEKYLL & HYDE: THE MUSICAL brings new life to Robert Louis Stevenson’s classic story of the epic battle between good and evil, as imagined by acclaimed composer Frank Wildhorn and writer/lyricist Leslie Bricusse. David Hasselhoff made his Broadway debut in the dual title role, bringing his performing talent off the television screen (Knight Rider, Baywatch) to the stage.

JEKYLL & HYDE is the longest-running show in the history of Broadway’s Plymouth Theatre, with more than 1,500 performances over nearly four years. The show won a legion of repeat visitors, dubbed by the press as “Jekkies”, with some hardcore fans having seen the show hundreds of times. Performers as diverse as The Moody Blues, Liza Minnelli and Johnny Mathis have recorded songs from the show, including “Someone Like You”, “This Is The Moment” and “Once Upon A Dream.” 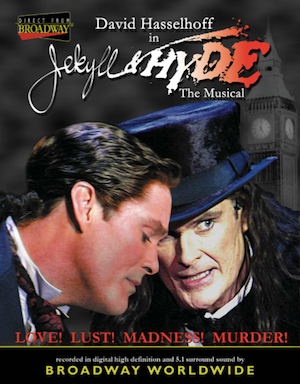