TINTYPES is a charming musical revue focusing on the exciting yet tumultuous period of American history between the turn of the 20th century and the onset of World War I. The score is a blend of patriotic songs, romantic tunes and ragtime by the musical masters of the era, including George M. Cohan, John Philip Sousa and Scott Joplin. Conceived by Mary Kyte with Mel Marvin and Gary Pearle, TINTYPES played Broadway’s John Golden Theatre in late 1980 through early 1981.

The cast of five, including Tony Award® winning actress Lynne Thigpen and multi-Tony® winning director Jerry Zaks, portray a variety of characters including hopeful strivers and dream-filled achievers among the common folk and politician William Jennings Bryan, radical Emma Goldman, inventors Thomas Edison and Henry Ford, among the famous. TINTYPES takes us through a time in our nation’s development when the transcontinental railroad and Carnegie Hall were built, electricity and the telephone were introduced to homes, cowboy Theodore Roosevelt became President of the United States and automobiles joined horse-drawn carriages on city streets. 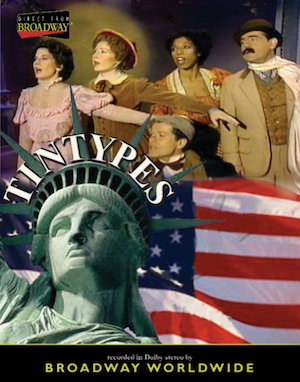