PUTTING IT TOGETHER: a musical review celebrates award-winning composer/lyricist Stephen Sondheim’s humorous, poignancy and sophistication in material taken from a number of his original musicals, including A Funny Thing Happened on the Way to the Forum, Anyone Can Whistle, Follies, A Little Night Music, Sweeney Todd, Sunday In The Park With George, Assassins, the film Dick Tracy, and Do You Hear A Waltz? 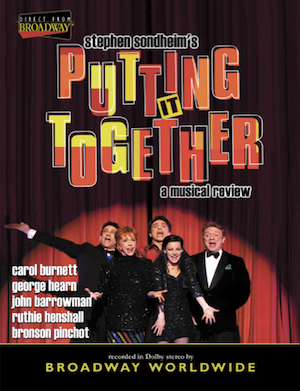 Carol Burnett as The Wife

George Hearn as The Husband

Ruthie Henshall as The Young Woman

John Barrowman as The Young Man

Bronson Pinchot as The Narrator